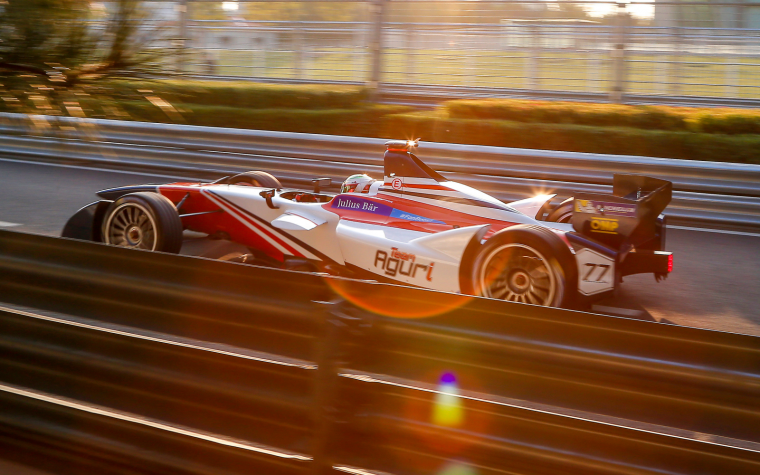 Following two exciting practice sessions, qualifying shaped up to be a real nail biter. As Renault e.Dams lost heir edge, neither of their drivers was able to make it to Super Pole and cleared the way for Antonia Felix da Costa to secure pole-position.

Sebastien Buemi hit the track first when the green flagged announced the start to qualifying. His fellow contestants in group 1 were Sam Bird (DS Virgin Racing), Robin Frijns (Andretti), Oliver Turvey (NEXTEV TCR) and Jerome d’Ambrosio (Dragon Racing). With just one shot at a full 200 kW lap, the drivers needed to give it their all to make it to Super Pole in the end. Favourite Buemi could not live up to expectations as a few minor mistakes on his lap demoted him to P3 overall, with Bird taking the lead ahead of Frijns.

Things did not improve for Renault e.Dams when Nicolas Prost headed into qualifying as one of the drivers in group 2: A 57.284 was slower than his team mate’s time and therefore not fast enough to make it to Super Pole in the end. Stephane Sarrazin (Venturi) was the quickest driver of the second group. Simona de Silvestro (Andretti) ended the session in P7 while Dragon Racing’s problems worsened as Loic Duval hit the wall and was therefore forced to retire from his flying lap, demoting him to P9 overall at this stage.

Daniel Abt who got pole-position in Long Beach last season went into the third session as the clear favourite following his strong performance in FP2. In the end, he only managed to securing P4 which was nevertheless the best performance seen in his group. Jean-Eric Vergne (DS Virgin Racing) only came in 8th, not matching his team mate pace. Nelson Piquet did not catch his team mate Turvey and ended the sessions as 11th overall, while Salvador Duran (Team Aguri) only out-qualified the struggling Duval.

Ripped off his Mexico ePrix win, Lucas di Grassi was highly motivated to put himself in the best position possible for the race later on and put his car in P4 during the group sessions. Strongest in group4 was nevertheless Antonio Felix da Costa (Team Aguri) who secured P2 ahead of a surprisingly strong Nick Heidfeld (Mahindra Racing) in P3. Mike Conway struggled during his flying lap, finishing in P16 overall while Bruno Senna put his Mahindra on P11. Therefore it was Bird, da Costa, Heidfeld, di Grassi and Sarrazin in Super Pole with one lap each.

The latter was the first to hit the track and started Super Pole off with a 57,412 which was then undercut by di Grassi who went nearly two tenths of a second quicker. Heidfeld was up next and looked strong in the first two sectors but lost a lot of time in sector 3, ending in P3 at this stage. Team Aguri’s da Costa was up next and with two reasonable first sectors and a cracking performance in sector 3, he went even faster than di Grassi. Last up was Bird, who put in a flawless performance but could not quite catch da Costa thus ending up only completing the first row next to the Portuguese. With the top-three only being separated by less than a tenth, the race will surely provide some fantastic excitement. 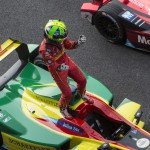 - << « Qualifying in Long Beach: what to expect 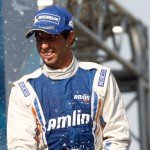