Prost – Senna on the front row after chaotic qualifying in London 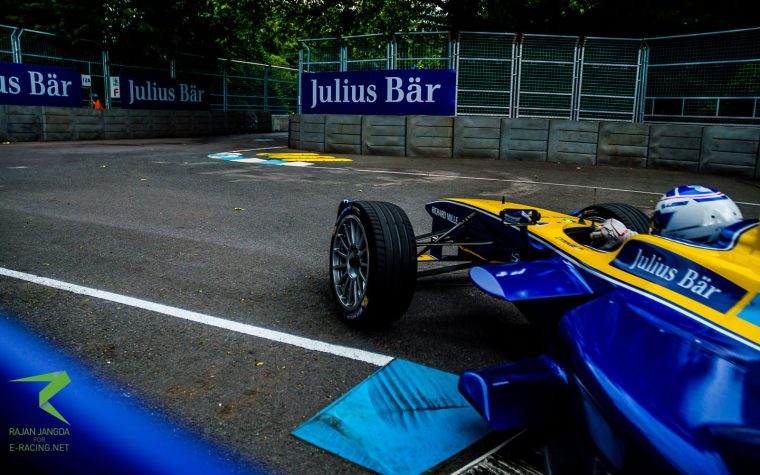 It was a manic qualifying session interrupted by both red flags and the rain, and therefore we see some unusual faces in the front rows of the starting grid: This time it was the second Renault e.dams car of Nicolas Prost which claimed the pole position, ahead of Bruno Senna (Mahindra and Oliver Turvey (NEXTEV TCR).

Prost was the first driver of group 1 to head out onto the track, followed by Jean-Eric Vergne. The DS Virgin Racing driver was the first one to set a fast lap, but was then jumped by Prost soon afterwards and the Renault e.dams man claimed the top of the time sheets with a lap of 1:23.247. The second attempt of Vergne went all wrong however, and the session was red-flagged when he hit the barriers. Andretti’s Robin Frijns was not able to get a clear lap due to Qing Hua Ma (Team Aguri) causing a yellow flag which interrupted Frijns’ lap. To give him a fair chance to put his Andretti car on pole position, he was allowed four more minutes after the session was re-started, and he used them well to move up to provisional second place with a laptime of 1:24.363.

In the second qualifying session, Oliver Turvey was able to put his car in provisional second place seven tenths of a second off the pace of Prost. Senna managed just barely to keep his car out of the walls after a lock-up, but he was able to move up to provisional third place, one second slower than the Renault e.dams man. Stephane Sarrazin however was not so lucky. The Venturi driver clipped a curb too hard, breaking the suspension of his left front tyre, and the race had to be interrupted again by a red flag after his flying lap ended in the barriers. Just like her team mate Frijns, Simona de Silvestro was not able to do a clear flying lap, so she too was allowed four additional minutes. However, a heavy rain shower hit Battersea Park just while Sarrazin’s car was retrieved. De Silvestro left the pits when the rain had passed; however, she slipped and spun on the drenched track and broke her front wing, effectively ending her chance for a flying lap.

Group 3 with the championship contenders was forced to do their qualifying on the damp track, and accordingly, all of their times were almost ten seconds off Prost’s lap. Dragon Racing’s Loic Duval finished in provisional seventh place with a lap of 1:32.727, while Lucas Di Grassi (ABT Schaeffler Audi Sport) was four tenths of a second slower. Jerome D’Ambrosio finished in ninth place, and the lap of championship leader Sebastien Buemi, who had struggled to have enough grip, was only good enough for eleventh place ahead of Antonio Felix Da Costa (Team Aguri).

The red flag made another appearance after Mike Conway had lost his car on the slippery track, and everyone but the Venturi driver was allowed five additional minutes of running time. Daniel Abt (ABT Schaeffler Audi Sport) and Sam Bird (DS Virgin Racing) battled for sixth place on a quickly drying track, with the German eventually beating the Brit by eight tenths of a second. Nick Heidfeld put his Mahindra car in eighth place behind the duo. Conway was demoted to 15th place, and Nelson Niquet Jr, suffered from problems that kept the NEXTEV TCR driver in the garage so that he will start tomorrow’s race from 17th place.

Since Vergne was not able to compete in the super pole shootout due to having his qualifying car destroyed, Frijns was the first one to head out onto the drying track and struggled to set a wobbly benchmark laptime of 1:29.500. Afterwards it was Senna’s turn, and he put himself on provisional pole position, almost two seconds faster than Frijns. Turvey was the third driver to head out and fight for pole position on home soil, however, the Brit was not able to repeat Senna’s feat and had to settle for provisional second place. Finally, it was Prost’s turn. Fastest in the field since group 1, the Frenchman started his fast lap with a scary moment f locking up and nearly hitting the wall. However, his first sector was still four tenths of a second faster than Senna’s and stayed ahead by two tenths in sector two to put his car on pole position with a lap of 1:27.192, half a second faster than Senna. 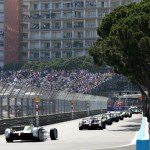 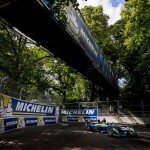