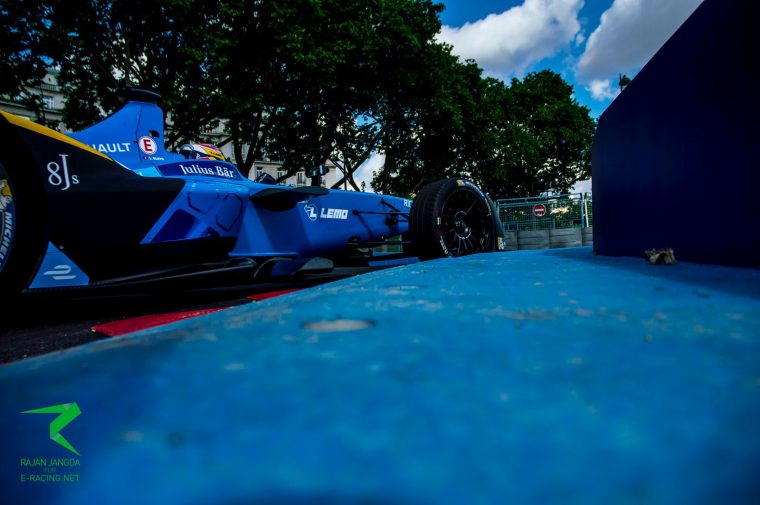 Sebastien Buemi will start the 2017 Paris ePrix from pole position following a closely-fought battle with Jean-Eric Vergne, who came within 0.006s of pole position at his home ePrix.

Group one featured some heavy hitters, with reigning champion Buemi in action along with Daniel Abt, Lucas di Grassi, Sam Bird and Felix Rosenqvist.

All five drivers waited around in the garages before heading out onto the circuit with three minutes of the group to go, seemingly not wanting to be the one to rubber in the circuit for the others.

Eventually the track became busy with Bird leading the five-strong pack onto the Parisian circuit and set a benchmark time of 1:03.573s, before Rosenqvist went nine tenths of a second faster.

Buemi then crossed the line to set a 1:02.171s, which was not to be beaten as di Grassi went third ahead of Abt in fourth.

In group two, Jose Maria Lopez set a purple sector one to go second fastest three tenths behind Buemi, while Nico Prost and Mitch Evans both put in impressive lap times to reach the top five, pushing di Grassi, Abt and Bird out of Super Pole.

Four of the five drivers in group three had already started from pole position in their Formula E careers, with the heavy favourite being local hero Vergne, who did not disappoint as he went second fastest to provisionally put himself into Super Pole.

Mexico City pole-sitter Oliver Turvey put in a stellar lap to go third fastest ahead of Lopez and Esteban Gutierrez, who put himself into P5 and in with a chance of reaching Super Pole.

Stephane Sarrazin pulled over to the side of the track on his 170kW lap before resetting the car and continuing on his way. His 200kW lap wasn’t spectacular and the Frenchman qualified last, almost four seconds slower than Buemi’s benchmark time.

Tom Dillmann made his qualifying debut in group four, with the Frenchman putting in a solid lap to be within a second of Buemi’s pace-setting time and ended the session in 15th.

The MS Amlin Andretti cars of Robin Frijns and Antonio Felix da Costa had contrasting fortunes, as Frijns missed out on Super Pole by less than a tenth of a second while da Costa could only manage 17th fastest.

Adam Carroll could find the pace in his Panasonic Jaguar Racing and could only go faster than Sarrazin’s Venturi, while Nick Heidfeld in the Mahindra missed out on reaching Super Pole by 0.014s and will line up sixth on the grid.

That left Buemi as the fastest man of the group qualifying stages, with Vergne, Turvey and Lopez joining him while Gutierrez reached Super Pole for the first time in only his third outing.

Gutierrez was the first driver to take to the circuit in Super Pole and set very respectable times in the first two sectors before locking up and going straight on at turn eight, ruining the Mexican’s lap.

Next up was Lopez, looking for his maiden pole position in Formula E. The Argentinian kept it clean to set a 1:02.640s and lay down the marker for the remaining drivers.

Turvey entered Super Pole with the knowledge that he will have to take a ten place grid drop for a change of gearbox and the Englishman went fastest in the first sector before a small error compromised his second sector, ultimately crossing the line three tenths slower than Lopez.

Home favourite Vergne then embarked for his Super Pole lap and duly delivered a 1:02.325s to take provisional pole ahead of Lopez, with only Buemi left to run.

The reigning champion was purple in sector one and kept the rest of the lap together to take his second pole position on the trot by 0.006s and deny Vergne at his home ePrix.

The result gives Buemi his eighth career pole position, while Vergne will join him on the front row ahead of Lopez and Gutierrez, as Turvey drops to 14th following his penalty. 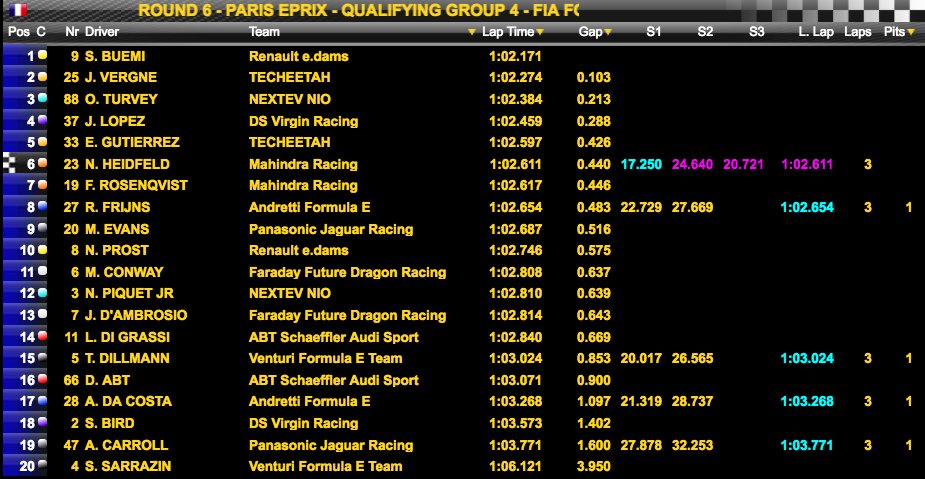 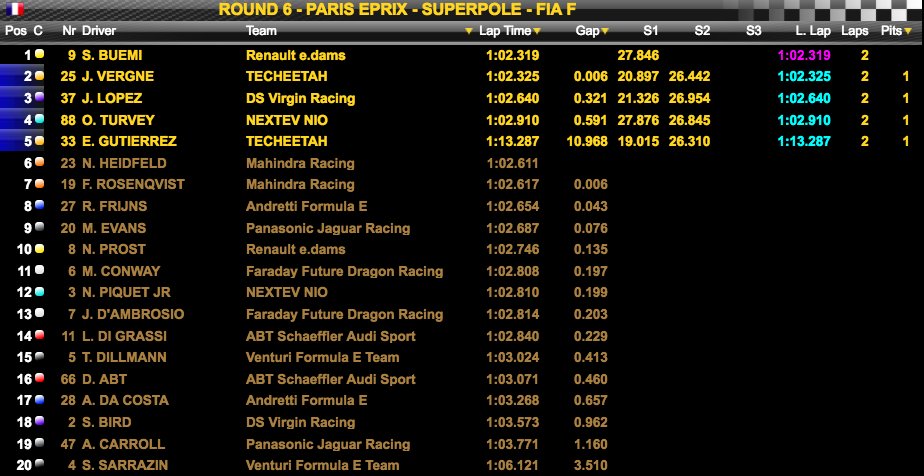 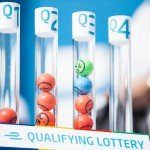 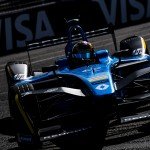