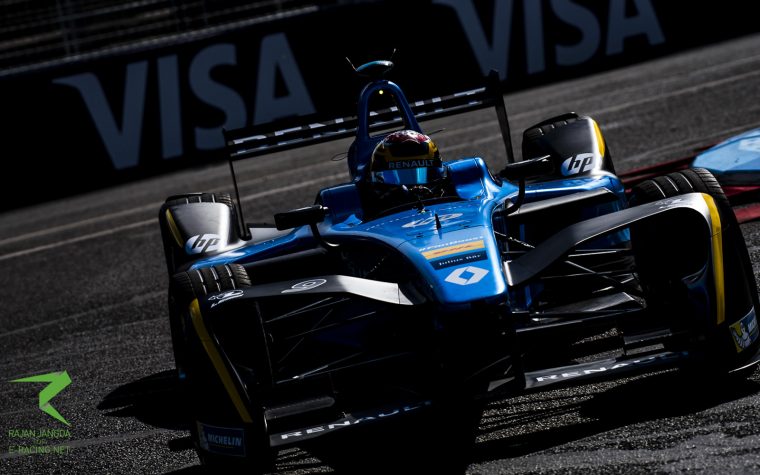 In front of completely sold-out crowds, the 20 Formula E drivers lined up for the second Paris ePrix, the first under the sponsorship of Qatar Airways, in the history of the all-electric racing series. Championship leader Sebastien Buemi (Renault e.dams) was able to put his Renault on pole-position ahead of local hero Jean-Eric Vergne (Techeetah) and DS Virgin Racing driver Jose-Maria Lopez, who had shown an impressive performance so far this weekend. Buemi’s main rival in the fight for this year’s Formula E crown, Lucas di Grassi (ABT Schaeffler Audi Sport), was only able to qualify 14th but he profited from Oliver Turvey’s (NextEV NIO) penalty for a powertrain change on Friday, gaining one position before the start.

Nevertheless, things should get even worse for the Brazilian at the start. He found himself right in the middle of the ruck going into the first corner and lost some positions battling with teammate Daniel Abt and one of the NextEV NIOs. Thus, he crossed the start-finish line in P15 after the first lap. Pole-sitter Buemi meanwhile, was able to defend his place on top of the pack and quickly built up a one-second gap to Vergne in P2. Lopez managed to just about keep his third place, but was immediately under a lot of pressure from Nick Heidfeld (Mahindra Racing) who got a great start.

Following a rather drama-free start to the race, the drivers quickly established themselves on their respective positions and the first position-battles ensured. While Buemi was able to pull away, Vergne felt the pressure from Lopez right behind him. Just a few positions further down the field, Esteban Gutierrez (Techeetah) and Felix Rosenqvist (Mahindra Racing) put on a great fight for P5, with the better end for the Swedish man in the end. As soon as the Mexican was demoted to P6, it was “All aboard the Gutierrez train” as the Formula E rookie had trouble keeping up with the top-five’s pace and became the leader of a six-car battle. He could benefit massively from the extremely tight nature of the track and was able to maintain his position for now. Another driver who fell victim to the trickiness of the Circuit des Invalides was di Grassi. While he was able to go faster than Tom Dillmann (Venturi) ahead of him, the Brazilian struggled to find a way past the impressive Formula E newbie.

Dillmann was able to keep di Grassi behind him as the race progressed and Andretti Formula E driver Antonio Felix da Costa became the Brazilian’s next big rival. The Portugese was able to move past the ABT Schaeffler Audi Sport star with a brilliant move in turn 1, but could not get rid off di Grassi afterwards. The two showed a fantastic and close battle for P14 which climaxed in a collision in lap 16. Di Grassi was moving past the Portuguese on the straight, yet going into the following corner the two collided and ended in the wall. While di Grassi was able to continue and made his way to the pits, da Costa had to retire from the race.

Da Costa’s stranded Andretti caused a full course yellow phase which the majority of drivers used for their obligatory car swap. Only Mike Conway (Faraday Future Dragon Racing) did not follow the other drivers’ strategy and decided to stay out, thus leading the race for a few laps before coming in several laps later. The pack meanwhile settled down again with Buemi in the lead ahead of Vergne and Lopez. Frijns was able to overtake Gutierrez and secure P6, while di Grassi’s day got even worse: the Brazilian was handed a drive through-penalty for being under the minimum pit stop time which was especially sour for Buemi’s main rival in the fight for the crown as he finally found himself within the points after the stops.

[/vc_column_text][/vc_tta_section][vc_tta_section title=”Lap 31 to 40″ tab_id=”1457796282994-8773c67d-25c7df03-e9bd”][vc_column_text] Di Grassi took his penalty on lap 31, rejoining the track in P18 behind Adam Carroll (Panasonic Jaguar Racing). Just a few laps later though, the Brazilian – whose race was ruined anyway – made his way back into the pits for repairs on his car and remained there for several laps. Things got heated on track was well, as Vergne was catching up with race leader Buemi. Nevertheless, a mistake saw the Frenchman in the wall on lap 34 and all his hopes for his first Formula E victory were suddenly destroyed. The damaged Techeetah on track brought out the Safety Car and brought Lopez into a position to challenge the Swiss in P1 for the victory at a possible restart.

Vergne’s car was brought back to the pits safely and the race was restarted with twelve laps to go. Lopez was able to keep up with the leader who surprisingly saw the iconic yellow, red and green ABT Schaeffler Audi Sport of Lucas di Grassi ahead of him, as the Brazilian tried to at least take home one point for the fastest lap which he was able to set on lap 39 with a 1:02.607.

While the final word in the fight for the Parisian victory was not yet spoken, the race became especially entertaining from Daniel Abt (ABT Schaeffler Adui Sport), Gutierrez, Dillmann and Nelson Piquet JR (NextEV NIO) who were fighting each other for positions seven, eight, nine and ten respectively. Nevertheless, Gutierrez as well as Frijns in P5 experienced a setback each as both of them were handed a 5-second penalty for speeding under full course yellow. Bird meanwhile was able to take the fastest lap away from di Grassi leaving the Brazilian without a single point scored. In his pursuit to still get that one point, the Brazilian wanted too much and put his car into the wall in turn 8 and brought out the second Safety Car of the race. Therefore, Buemi won the race ahead of Lopez and Heidfeld.

The race did not end without any confusion though as Abt’s car seemed to have stopped on track with a technical issue just as the cars were able to give it one last shot with the Safety Car in for the last few metres. With Abt stopped, Gutierrez was unsure of where to go and what to do and thus the pack pilled up right behind the Mexican. With him and Frijns both receiving a 5-second penalty, Rosenqvist, Nicolas Prost (Renault e.dams), Frijns, Piquet JR, Dillmann, Evans and Stephane Sarrazin (Venturi Formula E) completed the top-ten.

Sebastien Buemi was comfortably leading the race for the majority of the complete distance. As he decided to stop earlier during the full course yellow, Felix Rosenqvist took the lead for just a lap, before Formula E returnee Mike Conway was leading the pack for a handful of laps.

Thanks to a strong performance during the race and several drivers ahead of them battling with issues, the two Venturi Formula E drivers Stephane Sarrazin and Tom Dillmann made up the most positions during the race – ten and seven respectively. Nelson Piquet JR, Nicolas Prost and Adam Carroll were all able to gain four positions in the course of the Paris ePrix.

After putting his car into the wall, Jean-Eric Vergne had to retire from the race, dropping from P2 to P19, thus losing 17 positions. Esteban Gutierrez meanwhile showed a solid race performance, but a five-second penalty put him in P12 in the end, equalling the loss of eight positions after a strong qualifying. Faraday Future Dragon Racing driver Jerome d’Ambrosio experienced another weekend to forget, losing six positions all in all.

Based on their free practice 1 performance and their quickest qualifying lap, Esteban Gutierrez, Oliver Turvey and Jerome d’Ambrosio were the tree drivers that showed the biggest performance jump. While d’Ambrosio was able to improve his time by 0.961 seconds, Turvey found 1.235 seconds on the challenging track. On top: Gutierrez. The Mexican surprisingly made it to Super Pole as he was able to improve his FP1 lap time by 1.291 seconds.

Who is your Driver of the Race? Let us know! #DotR #ParisePrix 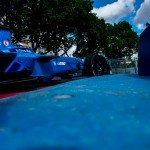 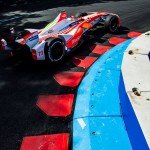