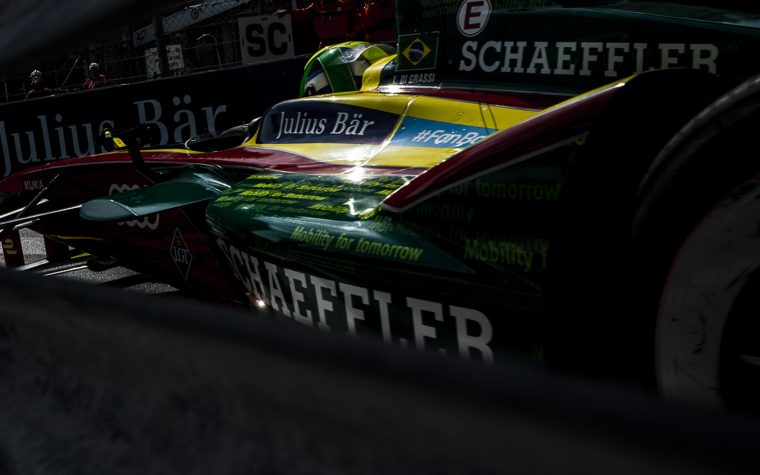 The last and all-deciding race of the FIA Formula E championship on the streets of Montreal looked like it would became as thrilling as yesterday’s race with the two championship rivals Lucas di Grassi (ABT Schaeffler Audi Sport) on P5 and Sebastien Buemi (Renault e.dams) further down in the midfield on P13. Mahindra Racing driver Felix Rosenqvist secured the pole-position in a thrilling qualifying and was able to defend his position at the start, even though Sam Bird (DS Virgin Racing) and Jean-Eric Vergne (Techeetah) right behind the Swede also started well into the 37-lap race ahead.

Nevertheless, Rosenqvist was able to benefit from Bird and Vergne battling each other with the eventual better end for the Frenchman. Di Grassi was shortly able to put pressure on Nick Heidfeld (Mahindra Racing) but suddenly lost pace and had to let Tom Dillmann (Venturi Formula E) past. The most unlucky man of the start was clearly Techeetah’s Stephane Sarrazin, who made contact with Daniel Abt (ABT Schaeffler Audi Sport) and Nelson Piquet JR (NextEV NIO) in turn one and found himself facing the wrong direction. He was nevertheless able to continue the race. Another man with no luck during the madness of turn one was championship contender Buemi whose right rear ot hit by Andretti Formula E’s Antonio Felix da Costa and caused some light damage with big consequences for the Swiss.

Buemi’s light right rear damage forced him to come into the pits and even though his crew simply took of the problematic part in a matter of a few seconds, the Swiss lost a lot of time and had to follow the rest of the field with a major gap to teammate Nicolas Prost (Renault e.dams) in P19. In the top-ten, the ABT Schaeffler Audi Sports were obviously struggling with their pace as both drivers dropped a few places. Abt then showed a fierce battle with Faraday Future Dragon Racing driver Jerome d’Ambrosio. The former Formula 1 driver seemed to hold the upper hand at first, but the German got his revenge just a few corners later and regained his eighth position behind teammate di Grassi.

In front, Rosenqvist and Vergne were able to pull away from Bird and Heidfeld. The German Mahindra Racing driver was able to pass Bird eventually but the fight for P3 continued in the course of the race. In the meantime, Dillmann showed his most impressive performance to date as he was easily able to follow the top-five.

Things were heating up as the drivers were nearing halftime. Vergne started to attack race leader Rosenqvist but was not able to find a way past the quick Swede. His teammate Heidfeld started to struggle in the meantime as Bird was able to regain his third place and fellow DS Virgin Racing driver Jose-Maria Lopez was also able to squeeze past the German. Heidfeld then was leading a train of drivers who all seemingly were able to go faster but could not find a way past one another. On lap 19, race leader Rosenqvist was one of the first drivers to swap cars while Vergne, di Grassi and a handful of others decided to do another lap. Nevertheless, this strategy did not work out for the championship contender as his stop was more than two seconds longer than the agreed minimum and he rejoined the track behind teammate Abt on P10. The German let his teammate past without any resistance just moments, handing di Grassi P10 while his main rival Buemi was still following the pack on P18.

Following the stops, the gaps between the drivers were suddenly bigger than before and therefore most drivers were trying to catch up with their direct opponents again. While Vergne was consistently closing his six-second gap to Rosenqvist in front, di Grassi was able to move past d’Ambrosio and teammate Abt followd his example just a few seconds later. Right ahead of the two ABT Schaeffler Audi Sports, the Venturi Formula E duo Maro Engel and Dillmann were involved in an intense battle for P6 which allowed di Grassi and Abt to catch up with them. This allowed the Brazilian to squeeze himself past Dillmann on lap 27 while Buemi used his FanBoost to take P15 from Robin Frijns (Andretti Formula E).

Di Grassi’s hunt for more points continued succesfully when he forced Engel into a mistake and was able to secure P6. At the same time, Vergne showed an impressive manoeuvre that allowed him to overtake Rosenqvist on the inside. His higher top speed was clearly visible as he was quickly able to establish a rather big gap to the Swede.

The final even laps of the race entertained the fans with the same amount of action seen before. While Vergne was pulling away from Rosenqvist, the two DS Virgin Racing drivers were showing a very close battle for P3, nearly making contact a couple of times. The ABT Schaeffler Audi duo meanwhile continued their coupled marching-through as they successively closed the gap to Heidfeld in front. With just two laps to go, Loic Duval (Faraday Future Dragon Racing) ended his race prematurely after making contact with one of the walls and damaging his car. A yellow flag but no safety car was brought out so Vergne was able to cross the line fair and square ahead of Rosenqvist and Lopez. Meanwhile – after waiting three years – di Grassi was able to celebrate winning the title after finishing in P7.

The fastest lap was set by Nicolas Prost (Renault e.dams) with an impressive 1:23.444.

Only about half of the field was able to show an improvement when comparing their FP3 and qualifying times. Nick Heidfeld (Mahindra Racing) showed the biggest performance jump, improving his time by 1.554 seconds. He was followed by Venturi Formula E’s Tom Dillmann (-0.962 seconds) and Sam Bird (DS Virgin Racing) who found 0.702 seconds on the streets of Montreal.

Wow. Another season has come to an end, but… who is your driver of the race? #MontrealePrix #DotR 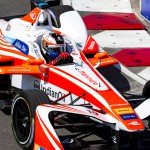 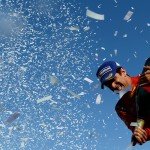