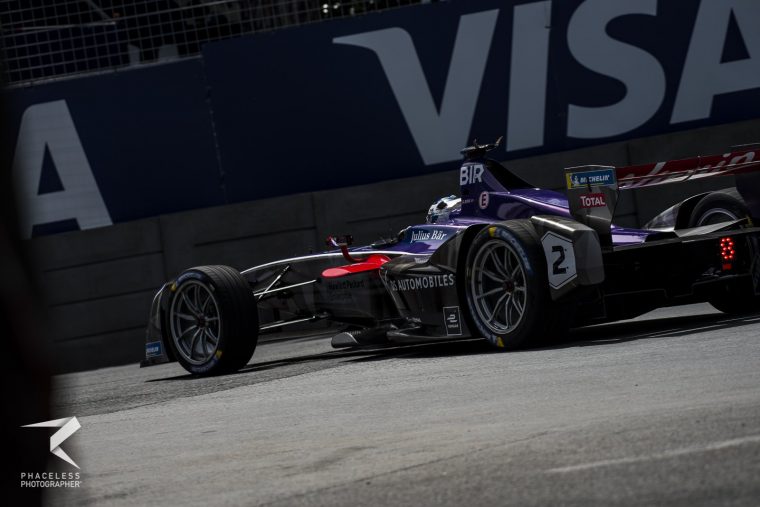 Sam Bird crowned himself Formula E’s first ever Roman victor ahead of Lucas di Grassi and Andre Lotterer. Lots of incidents, amorous advances with the walls and intense battles made the Rome ePrix an event for the history books.

Benvenuti a Roma! For the first time in the history of the ABB FIA Formula E championship, the teams and drivers take on the 2.860 kilometres of the track in the Italian capital city. The 45.000 fans at the track already experienced three eventful sessions earlier on in the day: While Felix Rosenqvist (Mahindra Racing) secured the best place on the starting grid ahead of Sam Bird (DS Virgin Racing) and Mitch Evans (Panasonic Jaguar Racing), other drivers had to deal with rather unpleasant performances. DRAGON driver Jerome d’Ambrosio dropped from P16 to P18 as he crossed the chequered flag twice in qualifying. Meanwhile, Antonio Felix da Costa (MS&AD Andretti) received a 10-place grid penalty for an unsafe release that caused him to crash into the DRAGON of Jose-Maria Lopez before the fourth group took stage in qualifying.

Pole sitter Rosenqvist reacted quickly when the lights went out, but he could not get away from Bird who was easily able to keep up with the Swede. Qualifying surprise Andre Lotterer (TECHEETAH) was able to put pressure on Evans in front of him, but the Panasonic Jaguar Racing driver kept his cool and was quickly able to establish a gap between him and the German. Oliver Turvey (NIO Formula E) was able to pass Sebastien Buemi (Renault e.dams) in the meantime, while Alex Lynn – who knows best how difficult the Roman track can be – was involved in a few minor incident with Jean-Eric Vergne (TECHEETAH) that caused him to lose parts of his front wing. The Brit was shown the black-orange flag just a few minutes later and had to go into the pits for repairs.

While gaps quickly settled in the top-10, things heated up further down the field. Edoardo Mortara (Venturi Formula E) found himself in a sandwich with FanBoost winner Luca Filippi (NIO Formula E) and Jose-Maria Lopez (DRAGON) in an intense battle for P16 but could defend his 17th position nevertheless. The man of the race thus was da Costa, who unobtrusively made his way from P20 to P11 during the first ten laps of the race, raising hopes at the MS&AD Andretti team for some points in the Eternal City of Rome.

While all eyes were on the interesting battles outside the top-10, Rosenqvist was able to increase his lead ahead of Bird. But the DS Virgin Racing driver soon able to turn up the heat and put in one fastest lap after another, closing the gap in the time ahead of the pit stops. The fight for P5 was also a tasty treat for all fans as Buemi was putting immense pressure on Turvey but could not find a way past the Brit for quite some time. On lap 15 he found a way and started his pursuit of Lotterer in P4.

While all eyes were on the interesting battles outside the top-10, Rosenqvist was able to increase his lead ahead of Bird. But the DS Virgin Racing driver soon able to turn up the heat and put in one fastest lap after another, closing the gap in the time ahead of the pit stops. The fight for P5 was also a tasty treat for all fans as Buemi was putting immense pressure on Turvey but could not find a way past the Brit for quite some time. On lap 15 he found a way and started his pursuit of Lotterer in P4. Just one lap later, the Swiss racing driver found himself right behind the TECHEETAH and when trying to overtake him, they made light contact but could continue anyway.

When the first drivers went into the pits to switch to their second car, the yellow flag was brought out. Nick Heidfeld (Mahindra Racing) was involved in a close battle with Turvey, and when going into the hairpin, they collided and caused a four-car pile-up with Filippi and Mortara. All four drivers were able to continue but lost valuable time ahead of their stops. Just a few moments later, Filippi and Turvey nearly hit each other again when leaving the pits. Turvey’s teammate Piquet JR was not as lucky: He stranded in the pit lane after a power loss and had to retire from the race as he could not get his car started again.

Once all drivers completed their obligatory car changes, Rosenqvist was still leading ahead of Bird, Buemi, Evans, Lotterer, di Grassi, Daniel Abt (Audi Sport ABT Schaeffler), Vergne and Maro Engel (Venturi Formula E). Just a mere seconds later, Lynn caused the first full course yellow of the race when he had to retire from the race after hitting the wall for the third time this weekend. Once the green flag was shown, Bird continue his pursuit of Rosenqvist and put a lot of pressure on the race leader. And apparently Rosenqvist could not handle it: Following contact with one of the walls, his suspension broke and he had to end his working day early.

Reigning champion Lucas di Grassi put on a fantastic show for the fans, once h switched to his second car. First, he passed Lotterer and a few minutes later he squeezed himself past Buemi with the help of FanBoost. In the blink of an eye, the Brazilian also closed the gap to Evans who himself was right behind Bird. An intense battle for the first ever Formula E victory in Rome was in the making…

Once di Grassi tried to overtake Evans, Bird seized the moment and put a gap between himself and the fighting duo. Lotterer soon joined the battle for P2 and the three drivers put on a great show for the 45.000 attendees. Di Grassi managed to pass Evans and Lotterer tried to follow the Brazilian’s example but did not manage to do so. All this allowed Abt to catch up with the battle-duo and when Lotterer finally found a way past Evans so did Abt. Meanwhile, Bird crossed the line as the first ever victorious driver in Rome ahead of di Grassi. In the end, Evans dropped to P9 as he had to save his last bit of energy so Vergne, Buemi, d’Ambrosio and Engel overtook him on the last metres while Mortara completed the top-10.

With the Rome ePrix, the fight for this year’s Formula E crown got a lot more interesting again: Vergne is still leading with 119 points, but Bird (101 points) passed Rosenqvist who is still on 82 points. In just two weeks time, all could change once again when the teams and drivers head to the City of Lights – Paris. 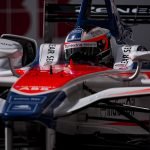 - << « When in Rome: Rosenqvist rules the streets of the Eternal City 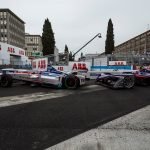