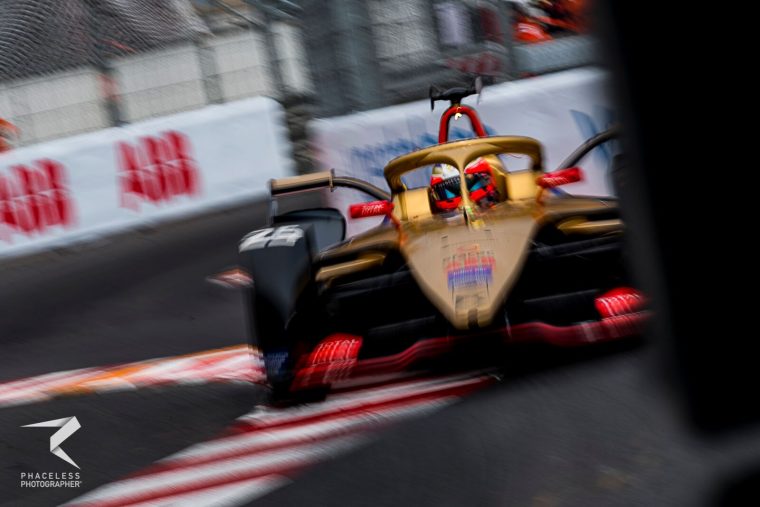 Jean-Eric Vergne has broken the streak and become season five’s first repeat winner following a closely-fought battle for the victory, with the top four separated by a mere 1.439s.

Following Oliver Rowland’s demotion to P3 after qualifying, DS Techeetah’s Vergne lined up in P1 in Monaco. The Frenchman got a good start and managed to hold his P1 through the opening metres, as did all other drivers as all made it safely through the first three corners of the E-Prix.

Andre Lotterer, hungry for progress, wasted no time in beginning to attempt making moves and climb through the positions. With two laps completed, his teammate in P1 was managing to draw out a gap between himself and Rowland, although Pascal Wehrlein was sticking to his rear with the hope of stealing the lead. Within three laps, the front two drivers had a lead of two seconds on the rest of the field.

As the time continued to tick by, the top three drivers all took turns in setting fastest laps, eager to keep up with one another and not lose their opportunity at grasping a race win at the world-renowned Monaco track.

With seven minutes of race time elapsed, Lotterer had made two attempts to activate attack mode, missing both times.

Wehrlein, who had been sticking to Vergne, locked up and lost his second position, falling back to fourth on lap nine through St Devote. In an effort to recover as much as possible, he was instructed to activate attack mode, giving him a boost on those ahead. Subsequently, he steals fastest laps and continued his damage control.

After receiving notice of Felipe Massa running out of time on his attack mode, Wehrlein began to push to pass Massa in the hope of winning back one of the positions he lost.

Battles for position continued down the leader board as Sebastien Buemi’s attack mode ran out and Alex Sims behind him activated his own.

With a gap of 1.3s, Vergne activated his first attack mode and began to open his gap further whilst Antonio Felix da Costa passed Alex Lynn for P7. Further forward, Massa closed in on Rowland and began to search for a way to pass for P2.

Not long after the announcement, Vandoorne and Sam Bird began to battle. Bird came out on top and not long after, di Grassi followed Bird through, pushing Vandoorne down to P11. Bird began to chase as he lunged past Lynn, making it stick and putting himself up into P8.

Battles continued in the mid-field as Rowland, in P2, has managed to close in on Vergne. However, with 18 minutes + one lap remaining, a FCY hits the track, slowing down all drivers as Maximilian Gunther pulls off and the stewards clean up debris from Lynn’s car.

Just over a minute later, the course went green and the cars began to race again. Di Grassi’s race soon came to an end as Sims seemed to miss the Audi, pulling across and pushing him into the wall.

Meanwhile, the top four remained very close together as Rowland continued to try and find a way past Vergne. The Frenchman began to open up a gap on the others once again whilst the rest of the field was queued behind Buemi in P5.

With five minutes + one lap remaining, Rowland activated his final attack mode, determined to steal P1. However, just after his activation, a yellow flag was out on the main straight to clear some debris. Vergne took the opportunity to activate his final attack mode, counter balancing the boost on Rowland’s car.

Wehrlein was the last of the four leaders to activate attack mode, hoping the slight bit of extra time he’d have will give him the chance to win P3.

Robin Frijns made contact with Sims as he tried to squeeze past, pinning him up against the wall. Frijns’ car was swiftly lifted from the track leaving enough time for two remaining laps. Rowland began the penultimate lap with 2% more useable energy than Vergne in P1. All was still to play for.

Bird’s race ended before the finish line as he picked up a puncture following a swipe on the barriers at the exit of the swimming pool and had to pull over, but the race up ahead continued.

The chequered flag flew with Vergne taking his second win of the season, Rowland took P2 and in third Massa experienced his first ever podium finish in Formula E, also a home podium for local team Venturi. 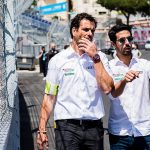 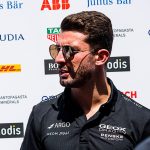