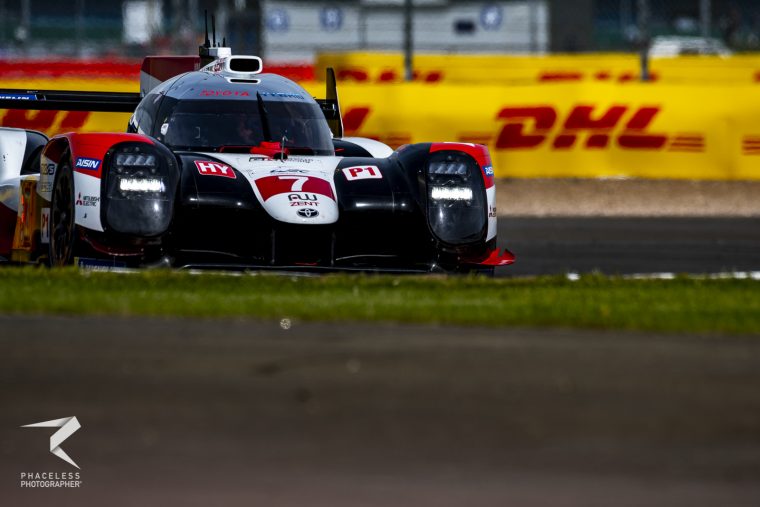 The FIA World Endurance Championship roared back into life on Sunday at Silverstone for season eight of the world’s premier sports car series, with Toyota’s Mike Conway, Jose Maria Lopez and Kamui Kobayashi performing a mid-race rain dance to take the chequered flag ahead of the sister Toyota driven by Kazuki Nakajima, Sebastien Buemi and Brendon Hartley.

It was a close fought battle between the two Toyotas throughout the four hour race, as both cars swapped positions multiple times, especially with the downpour making life difficult for all the prototype cars, but it was Lopez in the #7 Toyota that would have a 10-second gap to Nakajima’s #8 car that would prove decisive after the final round of pit stops. The Japanese giants didn’t have it all their own way however, with the two Rebellion cars putting up a spirited performance, hanging onto the Toyotas for large parts of the race, using full course yellows and strategy to keep them guessing, but it was the ultimate pace of LMP1 hybrids that would be the deciding factor over four hours of intense racing. Ultimately, the #3 Rebellion of Loic Duval, Nathanael Berthon and Pipo Derani would take the final podium position, one lap down on the two Toyotas, despite receiving two penalties for technical infringements.

The #1 Rebellion had a more difficult race however, with the car piloted by Bruno Senna, Norman Nato and Gustavo Menezes having multiple long pit lane excursions, even losing 4th place to the struggling Ginetta driven by Charlie Robertson, Ben Hanley and Egor Orudzhev. The #5 car making its proper debut in the LMP1 category had a relatively painless run to the flag in comparison to its sister car driven by former Audi Protege Oliver Jarvis, Guy Smith and Michael Simpson. The #6 car finished 17 laps down on the lead Toyota after having contact with the #71 GTE Pro AF Corse Ferrari of Miguel Molina on the entry to the Maggots/Becketts complex.

In what was arguably the most competitive class of the day, it was WEC debutants Cool Racing that took a memorable win. Piloted by LMP2 mainstay Nicolas Lappiere and Antonin Borga, the reduced duo managed to hold off a strong attack from the #35 Signatech Alpine of Thomas Laurent, Andre Negrao and Pierre Ragues. 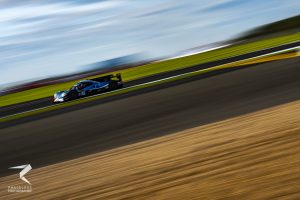 Of the eight cars that started the race in LMP2, five of them finished on the same lap, and a further five laps down on the overall winners. It was an LMP2 car that caused the first safety car of the day within the first five minutes, when the #22 United Autosports car driven by Paul di Resta ground to a halt on the pit straight. Not the WEC baptism that Zak Brown’s team was hoping for. But when the race got back underway, it was the Racing Team Netherlands car of Giedo van de Garde that built an impressive lead, even racing with the LMP1 Ginetta cars before the race settled into a rhythm, and was in contention for 2nd place until gentleman driver Frits van Eerd lost the position late on to the Signatech Alpine machine driven by Thomas Laurent.

The #37 Jackie Chan car piloted by Ho-Pin Tung, Gabriel Aubry and Will Stevens finished 4th in class, followed by the #38 Jota sport car, with replacement driver Antonio Felix da Costa filling in for an injured Anthony Davidson, and setting some very impressive lap times in the process.

Even if the GTE Pro category was trimmed down in comparison to last season, that didn’t tone down the intensity of the race. A thrilling battle all race long between Porsche, Ferrari and Aston Martin was the order of the day, with all but one car finishing on the lead lap, but it was the Porsche team that was able to weather the mid-race downpour to take a 1-2 with the new 911 RSR. 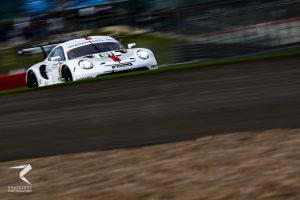 It was the #91 car of Gianmaria Bruni and Richard Lietz taking the victory, completing 115 laps ahead of the #92 car of Michael Christensen and Kevin Estre, and 2018 GTE Pro World Champions James Calado and Alessandro Pier Guidi having the podium in the #51 AF Corse Ferrari all but wrapped up before a late penalty for overtaking under the safety car handed the final podium spot to the #97 Aston Martin Vantage of Alex Lynn and Maxime Martin.

But before the rain came, it looked to be Aston Martin that had the race under control, with both the #95 and #97 car running one -two for a portion of the race. But when the downpour arrived, they struggled, and Porsche came into their own. The incident of the day came when the #71 AF Corse car of Miguel Molina was taken off by the Ginetta LMP1 car of Oliver Jarvis on the entry to the high speed Maggots/Becketts section, pitching the Italian into the outside wall and out of the race. Molina was announced as Sam Bird’s replacement for the 2019/20 season, and he was incensed with the incident.

With that being said, all six cars running were very competitive at some point during the race, and this bodes well for a super close season in the premier GT class.

GTE Am: Ferrari to the fore

In what was the most open battle of the day, the GTE Am race didn’t disappoint. At the chequered flag, it was the #83 AF Corse Ferrari 488 of Emmanuel Collard, Nicklas Nielsen and Francois Perrodo that took the honours ahead of the very experienced driver trio of Paul Dalla Lana, Darren Turner and Ross Gunn in the #98 Aston Martin, with the #70 MR Racing Ferrari driven by veteran Olivier Beretta, Kei Cozzolino and Motoaki Ishikawa taking the final podium position.

With many drivers that once raced in the GTE Pro category dropping down to GTE Am for this season, the calibre of drivers is at the highest it’s been in many years in the Pro-Am category. With the likes of Giancarlo Fisichella, Jeroen Bleekemolen, Darren Turner, Johnny Adam and Matt Campbell all now lending their services to the gentleman drivers in the category, season eight is bound to be the most hotly contested run for the GTE Am championship in recent memory.

The next race of the season is in five weeks time on October 6th at the Fuji Speedway in Japan for the 6 Hours of Fuji. 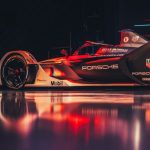 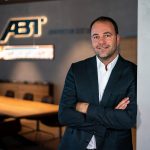 >> - ABT Sportsline reinforces its top management »