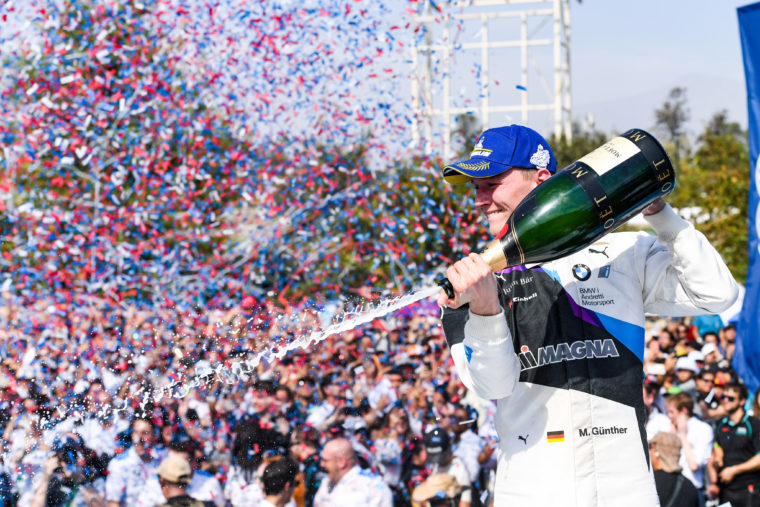 Maximilian Günther became Formula E’s youngest ever E-Prix winner at age 22 and sent a devastating warning shot to his title rivals under the heat of Santiago, while Stoffel Vandoorne and Mercedes had a race to remember, Porsche and Virgin among others one to forget.

Mitch Evans led the field after his brilliantly secured pole position and held onto it at the start of the race from Pascal Wehrlein, who got the jump on Günther. The early laps had their own flashes of drama – first Alexander Sims found himself suffering a stark contrast of fate to his teammate Günther by retiring, and was followed by Oliver Rowland.

Rowland’s nightmare Santiago weekend, already rebounding from a harsh qualifying crash leaving him at the back of the field, continued after a tangle with Sam Bird and he saw his front wing dramatically smash before his eyes, signaling the end of his E-Prix. Bird spun and was dropped down to 19th.

Günther was on the charge from the moment he had Attack Mode engaged, taking the fight to Edoardo Mortara and subsequently passing him, before making inroads into Evans’ lead upfront. Mortara fell back into the clutches of teammate Felipe Massa, and before long the two were fighting for the same piece of track and Felipe was almost nudged into the wall.

Jean-Eric Vergne took this opportunity to slip past Massa, who had fallen to seventh, while Günther’s pursuit of Evans ramped up more and more until with 25 minutes on the clock, the German seized his opportunity by first pressurising Jaguar’s race leader into going wide, before lining up a sizzling overtake into Turn 9 that stuck.

Vergne worked his way past the second Venturi of Morata, while Antonio Felix da Costa lurked in the wings to take fourth from the Swiss and exact his own designs on a podium place – but in doing so, a chain reaction ending with Mortara making contact with Vergne was created and the reigning Drivers’ champion proceeded to pick up front wing damage.

That front wing damage dramatically slowed his progress, and a controversial flashpoint became even more so when Vergne doggedly kept his teammate behind while smoke plumed from his front left tyre, slowing the two until da Costa eventually found his way through. Vergne was forced into retirement, while Mortara slipped out of the points positions.

da Costa didn’t let the delay halt his charge towards the leading pair, though. Within moments he was directly behind Evans and took his chance to snatch second with plenty of time left on the clock to make Günther work for his lead. Audi’s pair of Lucas di Grassi and Daniel Abt were rising through the field into the points, while Nissan’s Sebastien Buemi had a race to forget.

A move da Costa had been brewing was finally unleashed at the tight Turn 10 with three minutes to the end, but the physical nature of the overtake – leaving Günther aggrieved – was controversial and also not race-defining. Within minutes Günther was back ahead after a brilliant exit led to a pacy outside maneuver sweeping back into the lead at Turn 9, and at the E-Prix’s end, FE’s youngest race winner was likewise able to sweep up the plaudits.

Vandoorne’s consistency, finishing sixth, was enough to take the lead of the Drivers’ standings from Günther’s teammate Sims, while Evans did enough to hang onto a podium place from Wehrlein and Nyck de Vries in fourth and fifth. Di Grassi, James Calado, Massa and a recovering Bird rounded out the top ten, with Robin Frijns outside of the points and the Porsche duo of Andre Lotterer and Neel Jani failing to score along with qualifying’s hero Oliver Turvey.

But while impressive drives littered the grid, the star shining brightest once the dust had settled was Günther – a real force in the title battle for Season Six, and as he showed today no-one can afford to underestimate Formula E’s resident young gun. 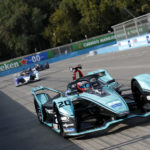 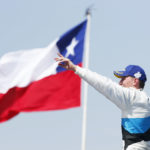