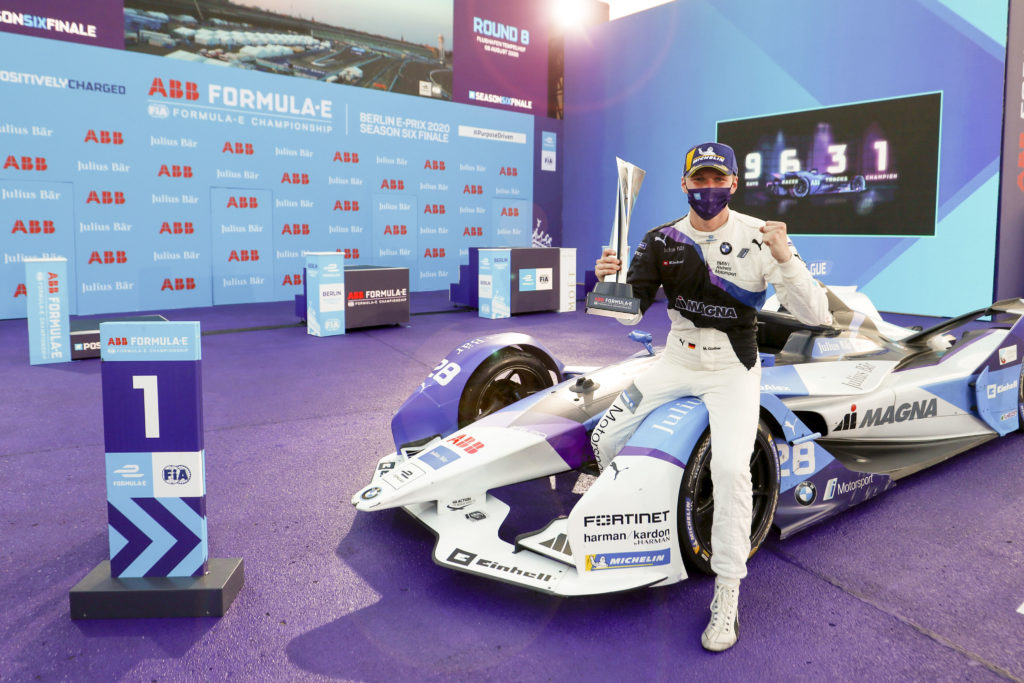 Maximilian Guenther has won the third Berlin E-Prix of 2020, with a late displacing of Jean-Eric Vergne and defence from Robin Frijns. Championship leader Antonio Felix da Costa performed a sterling drive to jump to 4th, but the championship fight still has a 22 point margin with 90 to score.

Before the race Formula E’s #PositivelyCharged initiative was again recognised with a moment of silence, while Mercedes EQ drivers and team staff once more took a knee on the grid for the Black Lives Matter anti-racism movement. The race then went underway and Vergne managed to hold onto his lead from Guenther, who lost second place to Jerome d’Ambrosio at the end of the opening lap.

Stoffel Vandoorne dropped to 6th, while Lucas di Grassi fell behind a fast-starting Oliver Rowland in the pack and Frijns made his way past Alex Lynn for 4th. Near the 10 minute mark a yellow flag was shown with footage initially showing Neel Jani and Sergio Sette Camara, a star qualifier earlier in 11th, in broken cars laid out across the track. Further replays revealed James Calado was involved, and had been hit in the back by Alexander Sims, who was attempting to lunge past Sette Camara from distance. Calado, Jani and Sette Camara were all forced to retire.

Vandoorne was the next sidelined, falling to the back of the grid before permanently pitting. da Costa, seeking to protect his 68-point championship lead, began to make moves on those in front and capitalise on the Belgian’s misfortune. Felipe Massa and di Grassi had an incident with each other heading into the first turn, resulting in di Grassi’s rear nudging the outside wall and dropping him to 13th.

Guenther began to hound Vergne for the lead of the race during the Attack Mode stage, but initially fell back to fourth behind d’Ambrosio and Frijns before overtaking them both to reclaim the position. Vergne managed to protect his lead from the BMW i-Andretti driver by making his Attack Mode stop later and defending expertly. Rowland and Massa both jumped up the order into 5th and 6th place, while Lynn narrowly held off da Costa after taking his Attack Mode in 7th.

With 15 minutes remaining the top three were Vergne, Guenther and Frijns, while da Costa finally broke into the top five at the expense of d’Ambrosio. Rene Rast bounced back from 21st to 12th and at one stage fought with his teammate di Grassi, while Nico Mueller performed a similar recovery drive to run 14th. Guenther began to battle once again with Vergne in the dying stages of the race, first making an unconvincing attempt into the first turn around the outside before sealing the deal later in the lap.

Vergne began to fall back as Frijns, who had slightly more battery percentage left to use, worked his way into 2nd. Frijns went after a struggling Guenther for the lead but was unable to make a move stick, running almost side-by-side with the German to the line while Vergne narrowly kept da Costa and a charging Lotterer behind to secure a place on the podium. Rowland, d’Ambrosio, a recovering di Grassi, Evans and Sims rounded out the top ten and da Costa maintained a 58 point lead on now second-placed Guenther, and the championship fight, while slim, remains open to a late challenge against da Costa.