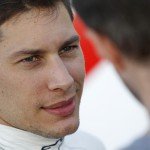 Joining the series at the Miami ePrix, Duval was immediately impressive and scored points in his very first race. He scored in five of the seven races he entered, finishing the season with two third places in Berlin and London. Like team-mate d’Ambrosio, he can be expected to fight for the title in season 2.

Duval started his car career successfully, with successive championships in Formula Renault Campus France (2002) and Formula Renault 2000 France (2003), before moving up to Formula 3 in 2004. After two years in the F3 Euroseries, he moved to Japan in 2006 – this would prove to be a highly successful move, as he has raced there ever since and racked up one Formula Nippon title (2009), one Super GT crown (2010) and many more wins in both categories. He also competed in the A1GP World Cup of Motorsport for France in 2008 and 2009, winning two races, while from 2012 onwards he has been an Audi factory driver, like fellow Formula E racer Lucas di Grassi. The crowning moment of his career so far is the WEC title – and overall victory at Le Mans – alongside Allan McNish and Tom Kristensen in 2013.