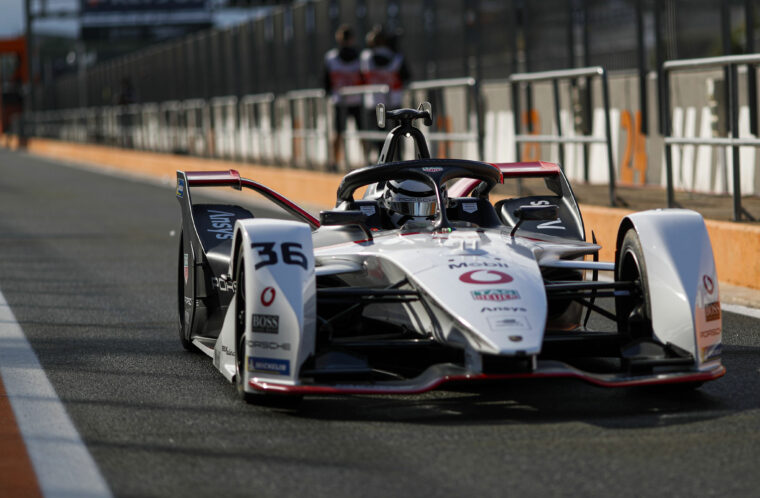 Season 7 pre-season testing has officially kicked off with the 24 cars making their first group outing on a cold morning at the Circuit Ricardo Tormo in Valencia, Spain.

The time has come to put the new powertrains to the test, for the teams to make the ultimate adjustments, and for the rookies, it’s a much-awaited opportunity to prove themselves against their on-track rivals before 2020/21 ABB FIA Formula E World Championship goes green next January.

The first three-hour session of the day saw defending champion Antonio Felix da Costa set the pace on a 1:20.417s with the track not completely drained from the torrential rain that fell over Valencia the previous night.

Dragon Penske Autosport´s Sergio Sette Camara – making his debut as a full-time driver to the all-electric series, made an early visit to the gravel into Sector 1, causing a brief red flag.

However, it didn´t prevent the 22-year-old to stand in the top five, by the end of the session, with his red chrome Penske EV-4.

The session resumed once again, after a second red flag caused by a spin at Turn 2 of Sebastien Buemi’s Nissan e.dams, which required removing the car from the gravel.

The firsts to make the lap times fall in the charts as the drivers continued their outings were the Mercedes-Benz EQ duo, with Nyck de Vries being the first to set a lap time above the 1:1:20.

The track conditions kept improving, and Envision Virgin Racing´s rookie Nick Cassidy placed himself between the top five; soon after, Robin Frijns moved over his teammate in the charts.

Oliver Turvey showed consistency from the start, running at times in third with the NIO 333 001, and indeed the British finished the first session setting the third-fastest time.

New to Mahindra Racing but not to Formula E, Alexander Sims quickly adapted to the car and the weather conditions, finishing fourth in the overall standings.

The Mercedes-Benz EQ pair managed to stay at the top, but as the final clock pointed the finals outings were approaching, the top five were separated by a difference of 0.8s.

Another rookie that didn’t disappoint was BMW’s Jake Dennis, running between the top three at times to finish the morning session in the Top 10.

“So far, so good! It’s the morning of the first day so nothing too much to look into but the car’s performing well and it’s been smooth,” said Dennis.

The British further explained: “Formula E is not my natural instinct of driving – which is to hit the pedal quite hard! It’s just trying to understand that, coming from GT3 and DTM.

“Getting in the car and lapping is key to that but it seems to be going well – whatever I’m doing. There’s plenty to learn but I’m encouraged.”

Meanwhile, Mitch Evans found himself in trouble as he couldn´t set a time with the Jaguar I-TYPE 5 as he went off track hitting the tyre wall at Turn 6.

“Private testing had been going pretty good, but this morning was a bad start. There’s a lot of work to do,” he said. 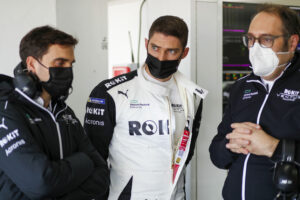 After the lunch break, the afternoon session began at 2 p.m local time.

The second outing for the Season 7 grid got underway with Andre Lotterer bringing down the lap times considerably to 1.13 with TAG Heuer Porsche 99X Electric.

With an hour remaining out of the second three-hour session, Nick Cassidy held to the top of the charts, being the only driver to break the 1:13 barrier with a 1:12.982s.

The track dried, and even the sun made a shy appearance at the Spanish circuit.

Vandoorne didn’t take long to establish a flying lap, and neither did Nico Mueller for Dragon Penske Autosport, also entering the 1.13 zone, though none of them could take the lead from Cassidy at the time. 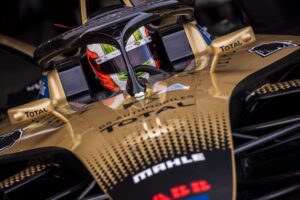 The Portuguese driver was followed closely by Norman Nato, Nico Mueller, Jean-Eric Vergne, Cassidy, and Frijns, until then, the only ones who had been able to reach the zone of 1.12.

In the final 30 minutes of the session, Cassidy found his way back to the top spots, placing Envision Virgin Racing in second place behind da Costa by a small gap.

Audi Sport ABT Schaeffler´s René Rast was running in third with his AUDI E-TRON FE07.

But this scenario suddenly changed as Lotterer stormed to the top, setting the fastest lap time with a 1.12.519s.

Towards the end of the session, both Mercedes drivers were handed a 15 minute stop and go penalty for exceeding the track limits.

A third red flag was shown, this time to Norman Nato, who ended in the gravel in Sector 3, this incident brought the session to an early end.

Lotterer finished the first day of testing as the fastest man on track, also setting the fastest time in sector one.

Overall, rookie Nick Cassidy seems to have adapted quickly to the car, performing extremely well in his first day of testing.
Moreover, the launch of pre-season testing marks the beginning of a path that will lead to what may certainly be one of Formula E´s best season ever, and there´s plenty of action to come in the following days.

Stay tuned for more news from pre-season testing at Valencia ahead of the 2020/21 ABB FIA Formula E World Championship! 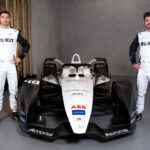 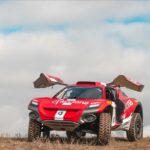