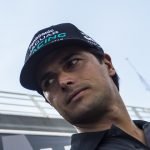 Son of three-time F1 world champion Nelson Piquet, the second generation driver was at one point best known for his controversial F1 career – however, after his successes in Formula E’s inaugural season, in which he clinched the inaugural drivers’ title at a thrilling finale around Battersea Park, he is now known as the first ever all-electric champion.

Starting racing in his native Brazil, Piquet’s early career saw him competing in the Piquet Sports squad set up by his father. After dominating F3 in his native country, he moved to Britain in 2003, finishing 3rd in the championship, before coming back in 2004 to win the title. 2005 saw a step up to the brand new GP2 Series, as well as some races in the A1GP World Cup of Motorsport series, where he won both races on the inaugural weekend at Brands Hatch for the Brazilian team. In 2006, he battled Lewis Hamilton for the GP2 crown right until the last race of the season in Monza, while after a year as Renault F1 reserve driver in 2007, he graduated to F1 in 2008 alongside Fernando Alonso at Renault. After a tough rookie year in which he took one podium in Germany, he left the team halfway through his sophomore campaign in 2009, when it was revealed that a crash in the 2008 Singapore Grand Prix, that led to Alonso winning the race due to the timing of the safety car, had in fact been on purpose. After several years of rebuilding his career in the USA, he returned to international racing in 2014 with Team China Racing in Formula E – and the rest is history. He later went on to also take part in the FIA World Endurance Championship with Rebellion Racing, racing in Silverstone, Spa-Francorchamps and Le Mans for the team, finish in an overall 15th position in the end of the season.