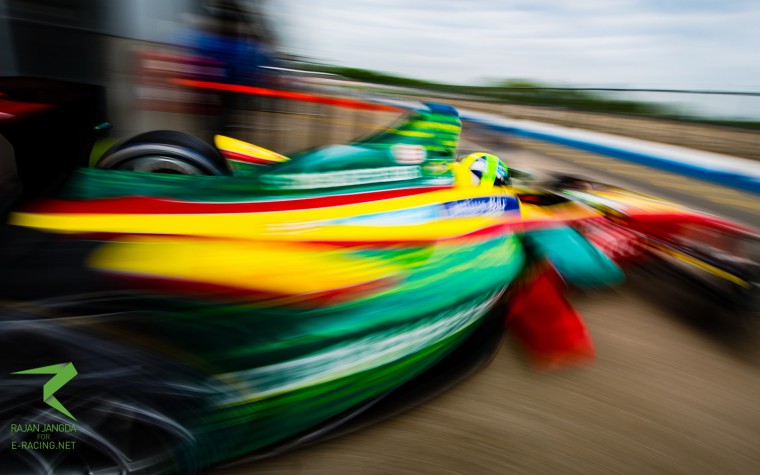 A crazy qualifying session in Hong Kong was followed by an equally eventful and entertaining race which saw Sebastien Buemi as the winner in the end. Lucas di Grassi showed the race of a lifetime, starting from P19 and also having to change his front wing, and Nick Heidfeld completed the podium in third.

Before the race started, fans and experts were convinced the tight characteristics of the challenging first turn in Hong Kong would cause a massive pile-up during the start. Surprinsingly though, the 20 drivers made it through the first corner without difficulty. While pole-sitter Nelson Piquet JR (NextEV NIO) and his teammate Oliver Turvey were able to defend their positions during the start, Jose-Maria Lopez (DS Virgin Racing) behind them went wide coming out of turn 1, slightly touching the wall and therefore allowing his teammate Sam Bird and defending champion Sebastien Buemi (Renault e.dams) to pass him.

Further behind, Daniel Abt (ABT Schaeffler Audi Sport) did not experience a smooth start and eventually found himself in a chaotic pile-up of cars, damaging his rear wing in the course and dropping down the order in consequence. Techeetah Formula E’s Ma Qing Hua joined Abt in his troubles, losing his front wing and quickly becoming an obstacle for Lucas di Grassi (ABT Schaeffler Audi Sport) right behind him, who damaged his front wing as he could not avoid running into the back of Ma’s car. Both drivers of the only German team on the grid were forced to come into the pits due to the state of their cars, being show the black flag with orange disc. While Abt rejoined the race in his second car, di Grassi’s squad decided to change his front wing and sent the Brazilian back out in his first car.

Out in front, Bird was putting pressure on Turvey, while Lopez continued dropping down the order. First, the Argentinian WTC champion had to let the Mahindra Racing duo Nick Heidfeld and Felix Rosenqvist through, before Loic Duval (Faraday Future Dragon Racing) also passed him. With Lopez being easy meat for everybody, the fight for the lead for heating up as Bird and Buemi managed to squeeze past Turvey and were starting their pursuit of Piquet JR. Jean-Eric Vergne’s (Techeetah Formula E) own pursuit of scoring solid points in Hong Kong found an untimely end as the French driver had to change into his second car in lap 15 due to technical problems.

With a third of the race already done, Rosenqvist found himself in a very promising position. Nevertheless, the quick rookie could not avoid sliding into the wall and breaking his rear wing in the process which forced him into an early stop. After the Swede’s unfortunate accident, the field was quietening down and the drivers settled down in their respective positions, but on lap 21 Lopez caused the Safety Car to come out. The DS Virgin Racing driver repeated the mistake already made by several drivers in qualifying, crashing into the wall at the exit of turn 4. Race leader Piquet Jr was only a few seconds behind the Argentine and could just about avoid hitting the stationary DS Virgin Racing. Thus the Brazilian hit the wall himself, fortunately not damaging his car, but losing valuable positions and handing Bird the lead as a result.

A few drivers such as Turvey, Buemi and Heidfeld used the Safety Car phase to stop while the majority of drivers only decided to change into their second car in the following laps. Turvey was the biggest loser of the pit stops as he lost positions to Heidfeld and Prost. Surprisingly, di Grassi found himself in P2 right behind Buemi after all the drivers had completed their obligatory car swaps with the same amount of energy as his Swiss rival. While Buemi was able to move away from the Brazilian, with five laps to go di Grassi was gradually decreasing the gap to the race leader.

Former race leader Sam Bird had just about been able to bring his car into the pits and looked like he would certainly rejoin the race in the lead, but due to technical problems when starting his second car, the Brit lost a lot of time and eventually left the pits one lap down and with all hopes for another Formula E victory ruined. In the end, he finished the race in P13 right behind Piquet JR and Adam Carroll (Panasonic Jaguar Racing) in P11 and P12 respectively.

With just enough energy left, Buemi crossed the finish line in first while di Grassi took a more than impressive second place ahead of Heidfeld. With three different teams present on the podium, Formula E has certainly proven that it is the racing series to beat in terms of excitement as well as close competition.

Who is your driver of the race? Let us know on twitter! 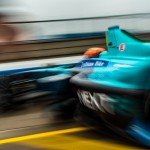 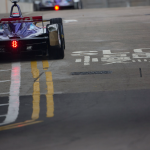